** JUNE SALE – UP TO 70% OFF PHOTOGRAPHY COURSES AND LEARNING TOOLS **

How To Photograph Dragonflies

How to photograph dragonflies is one of the top most asked questions we receive here at slrphotographyguide.com.

Those new to digital SLR camera’s often believe they need to have an expensive macro lens to take good images of insects such as dragonflies. This isn’t necessarily true. With a few quick tips, it is possible to take detailed photographs of dragonflies, no matter what type of lens you own.

How To Photograph Dragonflies Macro Lens

Camera Settings. How to photograph dragonflies.

An aperture of f/5.6 allowed the dragonflies whole body to be in sharp focus, from the tip of its head to the end of its tail. It’s recommended to keep the aperture in the least at 5.6 and photograph them side on like in this example.

Depending on how far away the background elements are to the dragonfly, you can try numerous apertures, up to and including f/11. The higher the f number, the more that will be in focus. For example, if I had shot this dragonfly at f/11 more of the wing span would have been in sharp focus. However, it’s also important to remember that the higher the f number, the further away the elements behind the dragonfly need to be if you want to achieve a nicely blurred background.

Because dragonflies do move around quite a bit (their head and wings mostly), you need to keep the shutter speed as fast as possible. Keeping the shutter speed at a fast 1/800th of a second, required an ISO of 400. I wouldn’t recommend going higher than 400 because you still want a quality photo. Usually 200 – 400 is sufficient for a fast macro lens, even within the darkest areas. You could also possibly get away with using a shutter speed as low as 1/200th of a second, if the dragonfly is sitting quite still. 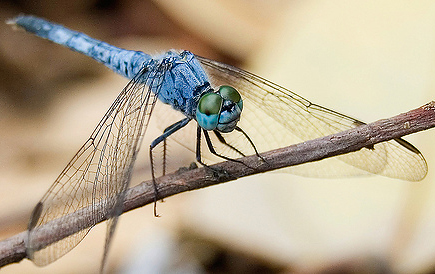 How to photograph dragonflies with Nikon kit lens

This time the photographer was not using a DSLR macro lens. As you can see, the result is still very good. The camera’s shutter speed was quite fast at 1/200th of a second. The dragonfly was also sitting very still with little movement.

Similar to the first image, the aperture was f/5.6. However, as you can see, the tail end of this one isn’t as focused as the first. This is due to the dragonfly being photographed from an angle and not directly side on. Having said this, the face was the main focal point, therefore making it very detailed.

The main difference between the 2 photographs in these examples, is that when you use a macro lens, you are able to display or print the image out larger than if you had used a wide angled kit lens. Furthermore, there is obviously better detail in the one taken with the macro lens.

However, the second dragonfly is still good quality for beginners who aren’t yet sure if they want to continue with insect photography.

Sign-up for our online photography course and learn how to take better photos in easy to understand “at your own pace” lessons.
Click here for more information and sign-up details!