Nikon’s AF-S VR Micro-Nikkor 105mm f/2.8G IF-ED macro lens is quality piece of glass that results in extremely sharp photographs. With a reproduction ratio of up to 1:1, it is considered a real macro lens. The Nikon website has all the technical specifications listed, so we won’t rehash them here.

Looking through photographer message forums, it’s common to come across a few gripes that refer to the high cost of this macro lens. However, the $755 USD price tag it currently sells for at Amazon is what you would expect to pay for good quality. Considering most photographers only purchase one macro lens, choosing quality the first time round will save you the frustration of having to buy again.

Listed below are the reasons why Nikon’s AF-S VR Micro-Nikkor 105mm f/2.8G IF-ED is considered a quality macro lens, as well as any disadvantages we’ve noticed since purchasing it a few months back. At the end of this review, you can also view extra examples of macro shots taken with it, so you can see the quality for yourself.

Why is this important for macro photographers?

The short answer: It allows a photographer to get more of the insect or flower in focus, while at the same time hand holding the digital SLR camera.

The long answer: Vibration reduction allows a photographer to hand hold their camera at a much slower shutter speed (up to 4 stops) than would otherwise have been possible. Shutter speed often effects how sharp an image will be. A general rule of thumb would be to ensure your shutter speed is faster than the focal length of your lens.

For example, if you were using a macro lens with a 105mm focal length, then your camera’s shutter speed should be at least 1/125 or 1/160th of a second or faster. However, when you have a lens that has vibration reduction, it is possible to set a slower shutter speed of say 1/60th of a second and still get sharp shots when hand holding your camera.

How is a slower shutter speed useful in macro photography?

When it comes to correct exposure (whether a photo is too light or too dark), shutter speed and aperture work together. If you’re not sure what aperture is, you can find a good article called: What is aperture mode. Basically the lower your f number (aperture), the less of the shot that is in focus. Nikon’s AF-S VR Micro-Nikkor 105mm f/2.8G IF-ED lens (and other macro’s) take this to the extreme. Photographing an insect with an aperture of f/7.1 might only get the head of the insect in focus. Take the image below for an example. 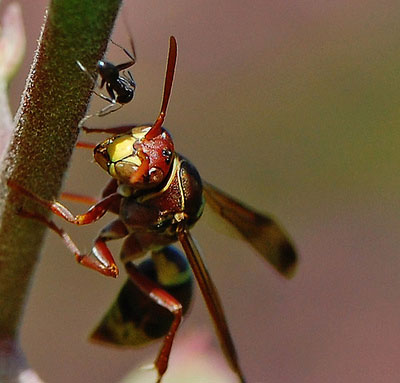 The macro photo above was taken with an aperture of f/7.1. Luckily for the photographer, it was also taken in sunlight and he was able to keep the shutter speed at a fast 1/1000th of a second.

If this same shot was to be taken under the shade of a tree, the shutter speed would most likely need to go down to 1/20th of a second to achieve a correctly exposed photo. Of course this would cause an extremely blurred shot due to camera shake (unless you have very steady hands). Lowering the f number to say f/5 would allow the photographer to raise his or her shutter speed to around 1/60th of a second.

For those that use Nikon’s AF-S VR Micro-Nikkor 105mm f/2.8G IF-ED lens, the vibration reduction makes this possible. Without it, the photographer would need to lower their aperture to around f/2.8, from which only the insects eye may be in focus. 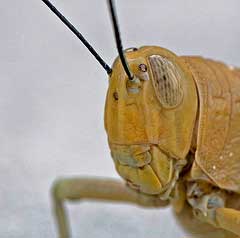 The photo on the left was taken in a shady area. The photographer wanted to keep as much of the insects head in focus as possible so he upped the aperture to f/11. In setting the correct exposure (not too dark, not too light), he found the shutter speed had to be 1/60th of a second. Normally this would be too slow for a focal length of 105mm. However, Nikon’s AF-S VR Micro-Nikkor 105mm f/2.8G IF-ED lens and its vibration reduction, helped make this hand held shot possible.

Another advantage is that it comes with an excellent lens hood and pouch for storage when you’re not using it.

The only possible disadvantage that has been seen so far, is that this lens is slightly larger and heavier than other macro’s we’ve tested. To help keep it steady, we recommend getting used to holding it with your left hand positioned under the lens. Other than that, it’s the best macro lens for Nikon SLR photographers who enjoy photographing the small stuff in life. 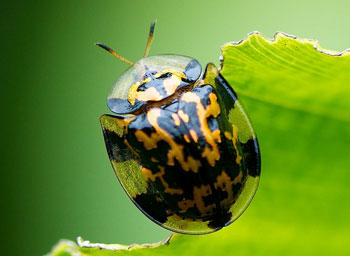 A ladybug photoraphed with a Nikon DSLR macro lens 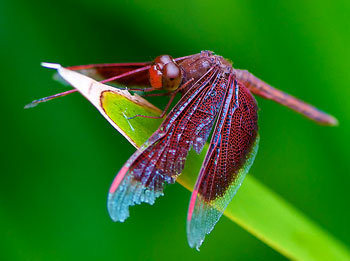 A dragonfly photographed with a Nikon DSLR macro lens