How to use aperture priority, AV (for Canon) or A (for Nikon) mode on your digital SLR camera

For photographers who use SLR cameras, AV or A mode determines whether all the photograph is in focus or part of. For example photographers can choose to have a sharp foreground and background, or they can blur the background. If you’re after more technical details, Wikipedia already has a great article on how aperture works in photography.

On digital SLR cameras, aperture is indicated by a f-number value.

The higher the F number, the more of the photo that will be in focus. For instance if you’re taking a photograph of a landscape, chances are you will want all of the foreground and background to be sharp and in focus. For this to happen you will need to set your digital camera f value or aperture as its known, to a large number, for example  F/11.

On the other hand if you’re taking a photograph of a bird and you want the animal in focus but not the background, then you would choose a small F number like F/4.

You can see what aperture your digital SLR camera is set at by looking at the back LCD screen for a F number. As you can see by the image above right, the aperture in that example is set at F4.0. The display shown on your LCD may look different to this example, depending on the make and model of your camera.

How to set your camera to aperture priority?

The letters AV (for Canon camera’s) or A (for Nikon camera’s) on your mode dial sets your digital SLR camera to aperture priority. Your camera then changes all other settings such as shutter speed automatically to suit.

Once you have AV mode turned on, you can change the f-number by rotating the main dial above the shutter button. Note: this is for Canon digital cameras. You may need to refer to your manual to find out how to change the F stop for your specific brand of camera.

The best way to understand how aperture works is to take numerous photographs with different f-number values and see what the difference is.

Shown below is a couple of examples I’ve done myself to help explain aperture.

In the first photograph shown below, the aperture (f number) was set at f/11 so all the image is in focus. 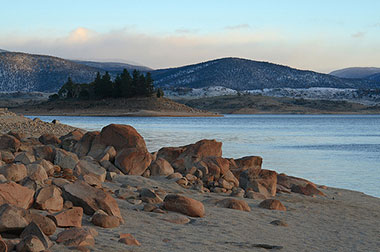 Now for the second photo, the aperture was set at a smaller number f/5.6 so only the rocks and sand at the foreground are in sharp focus while the background elements are blurred. 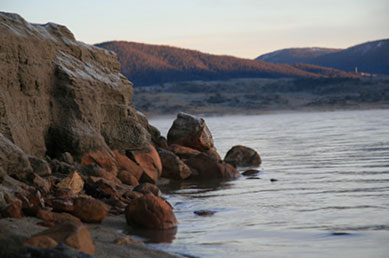 And here is an example of a close object photographed with an aperture value of f/5.6. As you can see the foreground object is in sharp focus and the background is blurry. 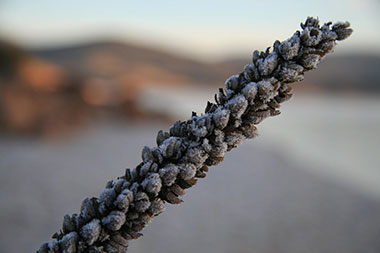 It’s also important to note that results from aperture settings can change from one lens to another. For example just because an aperture value of f/5.6 for your macro lens results in a blurred background, it doesn’t mean you should also set your telephoto or wide angle lens to the same f stop. Therefore its important to experiment with all your camera lenses so you know your equipment better.

All photographs shown on this page are taken with a Canon 400D (Rebel XTi) Digital SLR Camera.

Photography Assignment – Grab your DSLR camera and give this a try

Understanding how each mode works separately, is vitally important before trying M (manual mode). Learn how to use aperture priority and how different F numbers effect the overall image. Then and only then, will you fully understand how to use it when shooting in manual (M) mode.

PrevPreviousHow to keep the LCD screen on the back display of your Nikon DSLR on for a longer time?
NextWhat is the difference between AV, A, DEP and A-DEP camera modes and how to use themNext